Premier commits to MOU on finance 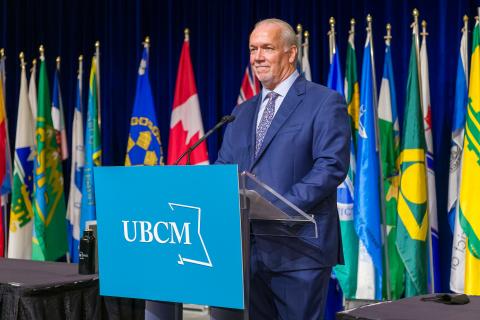 Premier John Horgan has committed the provincial government to work with UBCM to establish an MOU to review the local government finance system in British Columbia. Horgan indicated that he has asked Josie Osborne, the Minister of Municipal Affairs, and Selina Robinson, Minister of Finance and their staff to undertake this work. The Premier's commitment follows on the endorsement by UBCM delegates of a policy paper that proposed an approach to strengthening the local government finance system.

The Premier addressed delegates in a town hall format, a first for a B.C. Premier in recent memory.

During a taped address prior to the town hall, the Premier also said that he has directed George Heyman, Minister of Environment and Climate Change Strategy along with Osborne to create a new program to support local government climate action goals in the coming months. “You know how critical it is to have flexible, predictable funding to advance your climate action goals,” said the Premier. “We have heard your feedback.”

One of the Special Resolutions to the 2021 Convention (SR1) called upon the government for the creation of such a program.