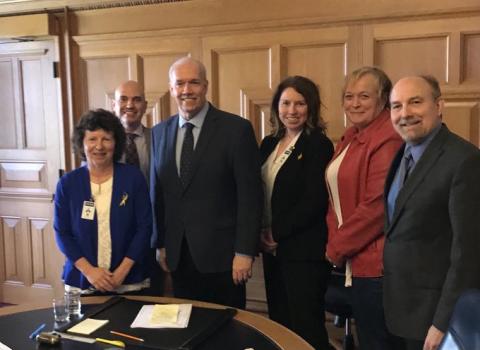 Since May, UBCM Executive members met with over 40 MLAs from all parties including the Premier, 12 ministers, the leader of the Official Opposition, the Leader of the Green Party and both caucus chairs to discuss key local government priorities. These meetings focused on attainable housing, climate action and community safety as they relate to the local government finance system.

The Executive discussed local government finance and the work with the Province to address mounting cost pressures for local governments while advancing shared local-provincial priorities. In particular, the Executive raised the importance of continued collaboration on housing and the need for a review of the funding mechanisms that finance growth-related infrastructure. The need to ensure that local planning and financial tools are based on the principle of ‘growth fully pays for growth’ was also a feature of these discussions. Through these discussions, UBCM Executive renewed its call for the Province to undertake a comprehensive review of the funding mechanisms for financing growth-related infrastructure including Development Cost Charges and Community Amenity Contributions.

The Executive also discussed the importance of climate action within communities, and the need for ongoing financial support for reducing emissions and creating weather-resilient communities. While commending the Province’s leadership on its climate change and adaptation strategies, and the new Local Government Climate Action Program, it called for a dedicated and permanent funding stream for local climate action. The Executive proposed that having a percentage of the provincial Carbon Tax allocated to communities would support innovative local climate action, and help tackle the remaining 25% of emissions not captured through CleanBC.

The need to develop a long-term local government funding and capacity-building framework for new and ongoing emergency management costs was also tabled for discussion with MLAs.  The Executive highlighted the financial pressures of preparing for and responding to, the increased scope and intensity of natural disasters at the community level.  It also acknowledged the costs of the new roles and responsibilities for local governments under the proposed modernization of emergency management legislation.

In terms of priority status, the Province released a new climate preparedness and adaptation strategy in June that provides the opportunity to advance the need for adaptation and emergency management funding and capacity-building support for local governments.  In addition, the Local Government Finance Working Group has identified the need for a review of the development finance system as a short-term work priority –  in line with one of the three ‘Advocacy Days’ priorities. UBCM continues to convey the key messages around the three priorities to the Province.