Pathways to Truth and Reconciliation 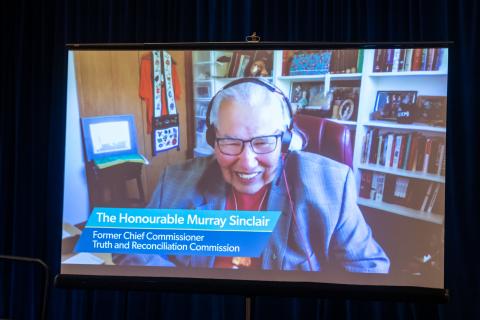 A UBCM Convention workshop, Pathways to Truth & Reconciliation, amplified the urgent question of how Indigenous and non-Indigenous communities can walk further along the path to reconciliation through the heartfelt presentations of four esteemed panelists.

The Honourable Murray Sinclair reminded delegates of the damage generated by the residential school era. Beyond the direct catastrophic impact of the residential schools themselves on children, the societal messaging of the time was that Indigenous people were inferior and fortunate to “saved” by Europeans. This messaging justified the invasive actions of non-Indigenous governments, including the removal of land and relocation of Indigenous people.

Murray Rankin, Minister of Indigenous Relations and Reconciliation, followed and focused on the importance of relationships.  With examples from Ka:’yu:’k’t’h’/Che:k’tles7et’h’ First Nation and the Strathcona Regional District and Leq’a:mel First Nation and the District of Mission, Minister Rankin reiterated the Province’s commitment to support reconciliation and to engage local governments as agreements with Indigenous communities are formed.

Delegates next heard from Andrea Reimer, a former City of Vancouver Councillor, who offered insights from her own experience in local government, noting that reconciliation is a relationship-based process that requires a clear understanding of what is urgent and what can be nurtured over time. “The biggest act of reconciliation is with ourselves” stated Reimer.

John Jack, elected member of Council for the Huu-ay-aht First Nations and chair of the Alberni-Clayoquot Regional District, advised delegates that building trust required patience and is not an exercise in “checking off boxes.”  By way of alternative, Jack encouraged delegates to be consistent in their stated intentions and to be active in establishing expectations and accountabilities.

“Change is disruptive and scary – that’s the point,” said Jack.