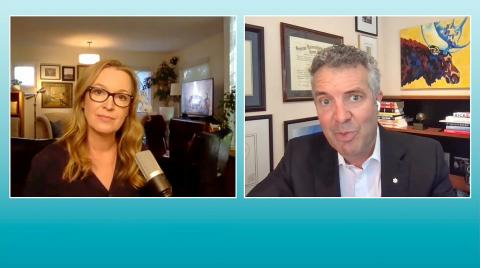 In a fireside chat with journalist Jody Vance, Canadian satirist, and author Rick Mercer expostulated on the state of the national psyche and the dynamics in the federal election.

Mercer reflected on the ways in which the tone of political discussion has taken a turn over the last 18 months of the pandemic. “There is a palpable anger you can see at the recent protests. But if there are 15 people there, the only thing they have in common is that they are angry. The question for me is: how do we get people back with the program so they aren’t picketing a hospital?”

Asked if there was hope in reversing the general level of anger, Mercer responded that he would like to think so. “If people are screaming about not wanting to get vaccinated, or losing their freedom, I have to think it is about something else.”

Mercer surprised delegates with the story that his first opportunity to speak at an event outside of theater came through an invitation from UBCM nearly 30 years ago. “It was my first job off the stage. I had written a one man play about the Meech Lake Accord that I toured around the country. Someone from UBCM saw it and invited me to the convention in Victoria. It was a big leg up – I was dead broke at the time.”

Asked about the role of comedy in politics, Mercer replied satire is about speaking truth to power, and there will always be a need for that. “I sometimes wonder how effective comedy is now though. Everyone has their own comedians – there is all of these echo chambers. If it is just preaching to the choir, it is worrisome. But I don’t know how to change it.”

Mercer also reflected on the degree of change that is taking place in broader culture. “I used to think the 60s was a time of dramatic societal change, and that nothing could ever match that. And now in my lifetime - with the rise of Trump, serious climate change, black lives matter, the global pandemic -  anything that happened in the 60s seems quaint. If I woke up and there were spaceships over Toronto it wouldn’t surprise me - nothing would surprise me.”