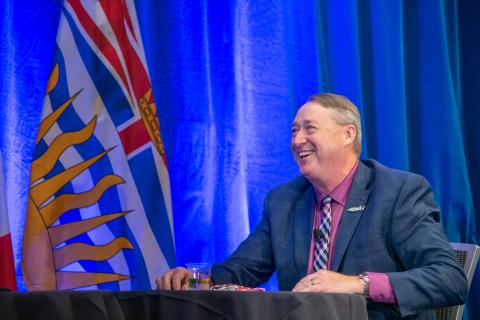 UBCM president Brian Frenkel called upon the province to work with BC local governments to strengthen the system for local government finance during an interview before the membership today. Frenkel made the comments in reference to the recommendations of the Select Committee on Local Government Finance, whose report forms the basis of policy paper to the UBCM Convention.

Frenkel highlighted the key themes of: managing cost drivers; property tax reform in light of a changing economy; and provincial collaboration that guide the report’s 20 recommendations.

The province’s efforts to modernize forest policy and its engagement with local government in doing so was also affirmed by the UBCM president. Frenkel indicated how the proposed changes respond to several longstanding resolutions, and urged local leaders to remain engaged with the consultation process that is underway.

Frenkel concluded by reaffirming UBCM’s efforts to seek greater clarity from the province on the role of local government in matters of UNDRIP implementation where local government jurisdiction is impacted. Noting that greater clarity will serve to strengthen the overall process of reconciliation, the president concluded by acknowledging the need for local leaders to redouble their efforts in the wake of the discovery of mass graves of children at the sites of former residential schools.

“The Truth and Reconciliation Commission shared this information (about missing residential school children) five years ago, but it took the discovery of a specific place… to shatter our collective indifference. This awakening is an opportunity for us to go further along the road to reconciliation,” said the president.