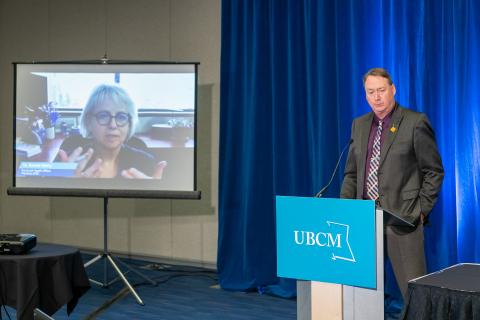 A workshop at the 2021 UBCM Convention yesterday featured a well-known panel of experts in health matters, climate and governance discussing what could be learned from the June heat dome. The unprecedented temperatures of that event led to more than 570 heat-related fatalities.

The panel showed delegates how worsening climate change and global warming will mean more extreme climate events, and identified some supports that have been put in place already, and what else needs to be done.

BC Minister of Health, Adrian Dix recognized the horrific impact of the heat dome, calling it a frightening and unsettling time. He told delegates the province is taking actions that include putting air conditioning in long-term care facilities, and providing additional funding for hiring 85 paramedics, more ambulances, 30 more dispatchers, and upgrading 24 rural ambulance stations to 24/7 alpha stations. Ambulances and emergency rooms are also being reorganized and reconnected to move ambulances in and out more quickly.

Minister Dix expressed his gratitude and appreciation for the extraordinary efforts made by local government leaders responding to the heat dome in the moment, and also their support of efforts with COVID-19, the overdose crisis, and the wildfires and smoke.

The provincial health officer, Dr. Bonnie Henry, joined by Dr. Sarah Henderson from the BC Centre for Disease Control, took delegates through an analysis of findings to date. Dr. Henry explained that after the 2009 heat wave the province had implemented a heat alert system. This system was improved in 2012 with specific criteria such as overnight temperatures and humidity that would trigger warnings and actions. This was expanded to the whole province in 2018.

The June 2021 heat exceeded what had ever occurred, and was especially destructive in terms of human health because it happened early in the season before there was an opportunity for people to acclimatize.

“This was a 1 in a 1000 year event with temperatures that had never been recorded before and that would have been virtually impossible without climate change,” said Dr. Henderson. She commented that this was the most-deadly weather event in Canadian history by roughly a factor of three. Most deaths occurred in the community in private residences, and the areas of risk had in common less green space, more people living alone, and lower income levels. She finished with “this could happen again next summer”.

CBC meteorologist and science reporter, Johanna Wagstaffe, provided climate-related context to explain how the blocked jet stream contributed to the high-pressure dome of heat over BC. She advised delegates that this event was 150 times more likely to occur because of human-caused climate change. With forward modelling, in a scenario with 2 degrees of warming, BC will see these events 1 in every 5 to 10 years, not 1 in a 1000.

Councillor Patrick Johnstone from the City of New Westminster provided an urban local government perspective. Johnstone described an overwhelmed emergency response system across the Metro region, which at times had fire departments resorting to calling taxis to escort people to hospitals so that fire crews could continue to respond to calls.

Johnstone spoke passionately for the need to recognize the heat event as a wake up call for a more concerted focus on climate change. Johnstone reminded delegates of the proverb that while the best time to plant a tree was 20 years ago, the next best time in now, and that a campaign to plant more trees now may save lives 20 years from now.

Ashcroft Mayor Barbara Roden shared key learnings that Ashcroft has acquired over years of coping with periods of extreme heat. Roden's comments focused on preparatory work to establish cooling centres, and communication procedures to be employed when extreme heat events are imminent.

The panelists confirmed that the way forward will involve action by all levels of government with an obligation to develop our collective resiliency and recommit to addressing climate change.